I’m in the final stages of finishing up my PADI Divemaster training and one of the last things we needed to do is our deep and search/recovery scenarios. It’s hard to find the water deep enough in a Minnesota lake so we usually head up to the iron mines by Crosby. Some of them are hundreds of feet deep and filled with water once they were abandoned. You can check out some photos below. In one you can see how red the gravel is from all the iron, one of the few downsides of diving here apart from being miles from a toilet is that red dirt and muck gets everywhere and stains too.

So while Lily and Heather were catching a movie, heading to the horse races at Cantebury and going to the park I was driving 2 hours north and stuffing myself into a hot wetsuit in the sun. If you’ve never dove or wore a wetsuit before, once it’s on you are overheating quick especially in the hot sun wearing usually all black. One of the most pleasant experiences in life is getting in the water wearing a hot wet suit and feeling it seep in the zipper down your back as you cool off.

The pit we dove is called Lake Louise and is pretty small and very quiet. It’s tucked back into the woods and it’s not super easy to find. I’ve never seen motor boats on it, but people do camp and you’ll spot canoes there occasionally. Because the mines are literally just holes in the ground and it’s very sheltered the water is usually very calm and the clarity is about the best you can get in Minnesota, 20-25 feet on a good day. Today was a pretty good day, the sun was shining and the water was almost glass.

The bliss was short lived. At the surface the water was about 73 degrees, but as you go deeper it gets colder and we were going relatively deep today. We went down to about 80 feet and the temp was hovering at a balmy 39 degrees. If you want to see what that’s like you can fill your sink with ice water and submerge your face for 20 minutes without taking it out.

After that we warmed up on the surface reviewed some knots and navigation quickly and then did our search and recovery scenario for some “lost” weights. Which ended up being really lost when the instructor that placed them was a bit off in his clues as to where he dropped them off underwater. We did end up finding them, so it was a pretty decent test of our search abilities.

As we surfaced on the final dive there was some ominous clouds forming in the distance and some rumbling thunder. We packed up and headed out to run into it on the drive home. I met up with Heather and Lily at the park and finally came home around 6:30. 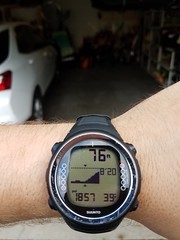 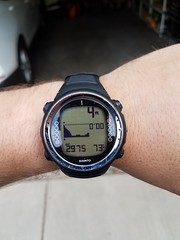 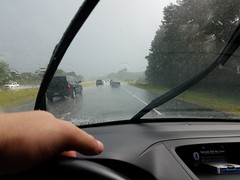 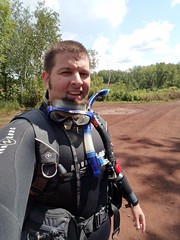 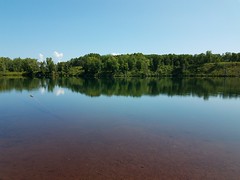 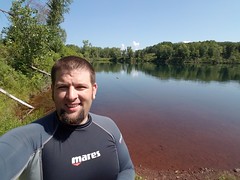